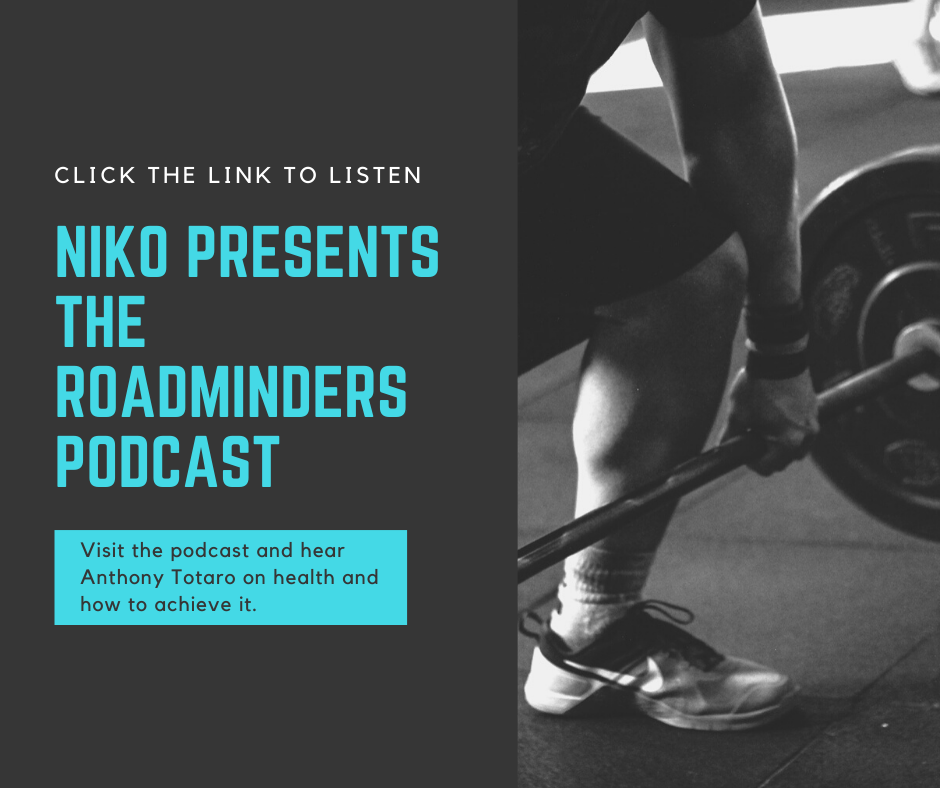 Excerpt From Podcast With Anthony Totaro

To Listen To The Full Podcast Here: CLICK HERE​

Anthony from The Mens Bootcamp: When you start restricting what you eat and cutting out things that’s, again, it’s one of those things that’s probably not going to last because we want to live, we want to enjoy our foods and we want to socialize.

Niko: From our type of background, being Greek/ Italian and that sort of thing, oh my God, some food that comes out; how can you say no to it.

Anthony from The Mens Bootcamp: Exactly.

Niko: What we’ve done, like I said, is just reduced the plate size, we get a bit of everything on there, it’s still a smaller serving, and I think that is going to help quite a bit. I feel like it’s helping already, so yeah.

Anthony from The Mens Bootcamp: And that’s it, and you can sort of track that as well. It’s based basically foodies’ energy. You know, the more energy you put in, obviously the more energy you want to expand if you want to start losing a bit of weight. So, it’s more on not quantity servings. That’s a really good way of tracking if you wanting to lose weight or if you want to reduce the portion sizes, rather than totally eliminating food when we’re probably going to start resenting eating.

Anthony from The Mens Bootcamp: I hear it from a lot of people, cut your sugar, cut your salt. Look, I understand that and I agree with that, that’s true for your overall health, but if you try to cut everything out and the things that you really love completely, it doesn’t work. I’ve tried it before; it just doesn’t work. It works for a little while, you drop quite a few kilos and all of a sudden you go, okay, you have a little bit, and before you know it you’re back to where you started from. So, just enjoy life and be happy.

Niko: I was watching a program the other day and there was a lady in, I think it was Texas; it was a cooking show one, and she was cooking beef steaks. I can’t remember her name, but she was 85 years of age, and she was still working, cooking the barbecue – the best steaks in town. People would line up at eight o’clock in the morning to get her steak; that’s how good at was. But you’re talking about these messy bits of meat that they just throw on there, and then it’s obviously sliced and whatever; that looked amazing. They were very simple stuff, but just cooked so well and cooked with a lot of love. And she’s 85 years of age and she eats meat and has her cakes and whatever, but living life.

Anthony from The Mens Bootcamp: Yeah.

Niko: And I’ve had an aunty that have lived low till 97. She kept smoking right up until she was 97. Not that smoking is good; I’m not saying that I advocate having a smoke, but I mean, it’s sort of like more to the point that there’s got to be other reasons why people have longevity in life and they’re happier and it’s a different life, rather than just trying to be so disciplined. I don’t know, I put it on the Whiskey Boy’s group, there was a comedian, and he went through all these different authors of the best books. There was a runner advocated running. He ran and he sold millions of copies; he died at 55 from running. Another guy, he was dieting; he died at 60. These guys, who have written these great books, but they’re all dying quite young from the things that they’ve been advocating. So, I don’t know, I think personally, you just going to be happy. You got to be happy, you got to enjoy what you’re doing and just keep doing it. I think consistency is important. That’s one thing that keeps me coming to your Bootcamp, Anthony, it’s the consistency, it’s the enjoyment of it all definitely. And yeah, you’re going to have your highs, you’re going to have your lows, but you just got to keep working through it, and that’s what helps I think.

Anthony from The Mens Bootcamp: Yeah, and as you said, you got to be happy with what you’re doing. You’re going to try things, you’re going to you know, some things might work, some things may not be able to, you know, you might not stick out because you don’t enjoy it or it might not work. You might get injured; different things, it might be. We’ve just got to adapt and obviously try and move the body for as long as you can. Obviously, we want guys to just be active because we’re living in such a sedentary world now; a lot of people just sort of sitting down in offices and are driving as well. We’ve got to drive a lot and everywhere and people aren’t being active.

Niko: I can guarantee that that’s a big problem because even amongst driving instructors; there was so many of them that have heart attacks. Some that would go to the drive tests and just drop dead there. So, they’re just sitting down all the time. It’s an unhealthy lifestyle, whatever way you look at it, you’ve got to keep the body moving. The body needs that moving. If you don’t move it’s not good for it.

Anthony from The Mens Bootcamp: Yeah, exactly right. And you know the saying, if you don’t use it, you lose it. It’s one of those things, you know, muscle, bone strength; all those things, we just want to keep active as we can. The longer we do it, the longer we’re going to be better off movement-wise. You’re still kicking on and enjoying karate and doing those hobbies that you’ve done.

Niko: I love it. I do that Monday nights, Thursday nights, and Saturday at the moment; Saturday morning. So, it’s a lot of fun and I enjoy it, and it’s online as well too; virtual. So, it’s good, and it’s just something to keep your body meeting. I’m not saying I could fight anyone or break out of a cardboard box, but at the same time, you just feel like you know some stuff, you can sort of protect yourself a little bit. You’re just going to at least lift your arms up or do something to protect yourself. You know what I mean?

Anthony from The Mens Bootcamp: Yeah.

Niko: And it’s more than the defense, it’s actually, again, the physical part of it; just the exercise, just a different way of moving the body because I find with the martial arts, you move your body; you’re twisted suddenly. And that’s why I want to do the bootcamp as well too because I found that I would have a lot of problems with the body. And thank God, touch wood, and my body feels a million times better than it did well over a year ago. So I don’t get the same niggles as I used to. Still trying to get the weight down a little bit, but once the weight comes down a bit more, the whole body’s going to feel a million times better.

Anthony from The Mens Bootcamp: Yeah, and what I’ve seen is, it’s like with your karate, I mean, it’s a skill as well. You’re working the cognitive side of things, these new skills and with training you’re doing different exercises that you haven’t really done prior. And that’s the thing, we’re just basically a blank canvas and we’ve got to give ourselves as much stimulus as we can, whether it’s karate, whether it’s juggling, I’ll get a bit of an addiction to juggling and at the moment, that’s my skill, but I think–

Niko: What are you up to now?

Anthony from The Mens Bootcamp: I’m trying to start five ball juggling, but I feel like I need like roof space and we’ve got low ceilings and outside at the moment, it’s not that practical having a mask on and trying to juggle. So, it’s one of those things where I’ve been working on that behind closed doors, on top of my regular training, and running and things like that. But as I was saying, if you can expose yourself to as much activities and skills and things like that, you’re keeping yourself busy and active in a healthy way.

Niko: Well, on the weekend my daughter wanted to plant the garden with me, so we planted some herbs. We planted a little bit of parsley, some mint, some spring onions, and some basil, so we did a herb garden together; that itself is something to do. It’s just getting out there, just getting out there and being active.

Anthony: Yeah, for sure.

Anthony from The Mens Bootcamp: Yeah, so we’ve got a new van; a Renault Kangoo and we’re in the process of getting it fit out, sort of the back of the van, obviously, so it can log all our equipment around nice as safely. Actually, the shops closed at the moment, so we’re waiting for them to reopen and get it done. But look, we haven’t had to sort of use the car for bootcamp purposes yet, so I’m obviously not running for a while now. Obviously, just doing virtual classes, but we’re looking forward to using the van, and obviously it’s so much more easier to access things, and carry it around safely, and obviously nice and secure as well.

Niko: Yeah, well, that’s good. And how do you find driving around to the different places; Do you mind that or…? Like, early in the morning it should be okay.

Niko: How far are you from the training centre?

Anthony from The Mens Bootcamp: We’re in Moorabbin, and so we traveled to Keysborough, so that’s about a 20 minute drive. Alexandra who runs a women’s boot camp, she was just driving all the way to Narre Warren from Moorabbin, so first thing in the morning, that’s a fair hike. She’s actually stepped away from the Narre Warren location and now she’s passed that on to a different manager. So, she’ll be looking to something a little bit closer to home, but I don’t mind it. I mean, I’m up early in a car, no traffic on the road really. Later at night, it’s obviously a bit different, obviously, the PM class, dealing with a bit more traffic.Anthony from The Mens Bootcamp:

To Listen To The Full Podcast Here: CLICK HERE​