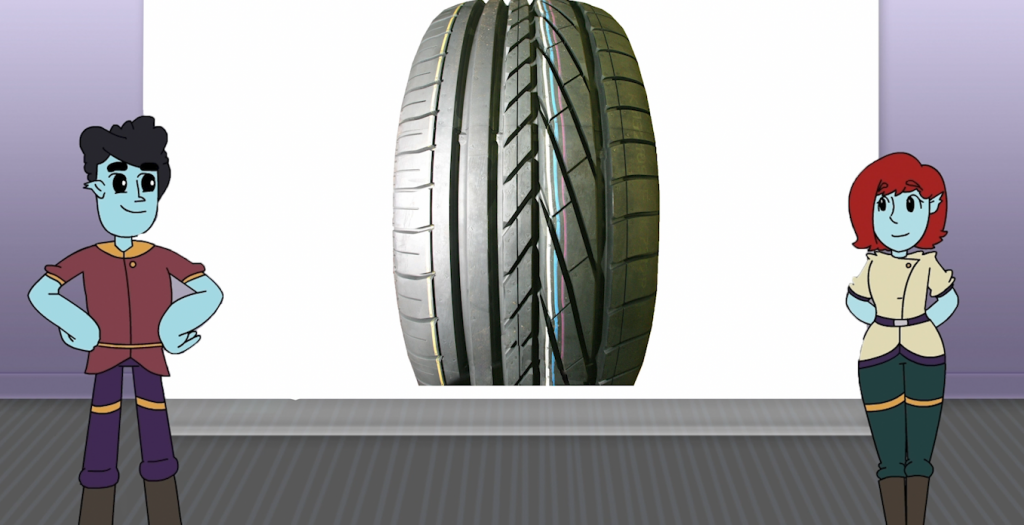 Lee: You will get more kilometers out of a premium brand and a premium price tyre. But the difference between a premium price tyre and a budget price tyre in terms of longevity is not significant. Provided you’re maintaining your tyres in terms of inflation, you’re getting them rotated when you get your car serviced generally is a good rule, you’re going to get mostly the same lifespan out of them. The big difference between tyres is the quality.

Niko: Okay, that’s good to know because I’ve always wondered why they recommend one tyre above another tyre. I always seem to have gone for these sports tyres. I don’t know why, because that’s what they keep saying works better for the car. The other big question I’ve always had and students ask this all the time is air pressure. How much did you put in a tyre?

Because other people say like 32 PSI, some do 34, 35, 36, and I suppose it depends on what you’re going to be using it for. I mean, I remember actually going in the desert on a four wheel drive and they actually take the air out of the tyre so that the car can roll through the desert.

Niko: So, how do you know what PSI you should put in your– I mean, how much air pressure you’re putting your tyre?

Lee: Yeah, fantastic question. The easiest answer to that is if you go to your car and you open up the driver’s side door, there’s a little placard on the inside of the driver’s door. And that will show you the different tyres that, that car had standard option. So, there might be three or four different size tyres that that vehicle would be manufactured with. And generally, as part of that, it will have the recommended PSI next to that as well also. If you’ve taken–

Niko: I’m going to go check it out myself; I didn’t know.

Lee: It might be, you know, we use an example that they’re no longer going to be made, unfortunately, but say a Holden Commodore, you buy a new Commodore, you get it with as a standard, it would come with an 1/8 inch rim. It may say it’s a 34 PSI requirement is what they recommend on that tyre. You buy that exact same car, but you get the 20 inch sports mag wheel upgrade; it might recommend a 31 PSI or a 32 PSI instead. So we, in terms of Mobile Tyre Shop, as a rule of thumb, we will just follow that tyre plaque card. If you have gone out and purchased a set of aftermarket rims and you’ve got something completely different that’s off the manufacturer, normally there will be a range on those PSIs, and as a standard, we would set it to two PSI above the minimum recommendation. So if the size recommendations are giving you anything between 31 and 36 PSI, we’d set it to around 33/34.

Niko: Okay. Are there certain tyres that you wouldn’t put on a car? Like, I mean, you say people with big mag tyres and you thinking, are they safer; are they not safer? I mean, some other rims, I mean, that’s a question that came in my mind all the time as well too as an instructor, what is the safest tyre, I mean; how can you tell?

Lee: Yeah. So, there are a lot of generalities in terms of performance and that sort of thing. As I said, generally speaking, the more you pay for a product, a better quality of product you’re going to get; the better performance you’re going to get out of it. There are specific brands and I mean, I don’t want to get too far into, I guess, what each brand does better than the other. But, particularly brands that are made for the European market, so things like Continental and Michelin, they tend to be very soft, very sticky tyres, so they’re going to get a lot more grip. So if someone’s looking for a safe tyre; we want to look at a softer compound tyre or a tyre that he’s going to be a little bit stickier and a little bit grippier. And the offset to that and what we explained to our customers is the offset to that is you are going to get a shorter lifespan of the tyre. As it’s grouping more, the tyres going to be degrading quicker, it’s going to be breaking down further, so you might end up getting two, five, 10,000 less kilometers than you did out of the budget brand tyres that you bought last time. But, you’re reducing your stopping distance by tens of meters, which is a huge change in terms of the performance of the vehicle.

Niko: That’s massive. It’s interesting, but that grip is that for wet weather as well? Is that what you’re saying?

Lee: That’s all the time. One of the biggest concerns, one of the biggest concerns that we have from customers, particularly with high-end premium vehicles, you know, things like your Mercedes, CLK’s and these sorts of cars; they’ll ring up and they’ll say, “Look, I bought a set of Continentals and they didn’t last me at all. I don’t want them again. What else have you got?” And we then I guess, have to educate the customer and let them know that the reason that you’re not getting the life out of them is because of the way the tyres manufactured. The rubber compound is specifically made to break down quicker because the tyres are made for these performance vehicles, so that as you’re getting up to speed and slowing down quicker, you’re not having the car slide along, it’s going to stop. But the offset to that is, as I said, the tyre breaks down, the rubber falls apart; you need to replace them sooner.

Niko: So, the average Joe Blo, [unclear06:24]. I mean, that’s a big question because most people are looking to reduce say the costs obviously, like myself as a driving instructor. I had a set of tyres that went up to 80,000 Ks and I was impressed at how long they lasted, and I was happy that they lasted 80,000, but they were only recommending like 40 to 50,000 Ks on them. But, they did last 80,000, it was brilliant for me.

Lee: And they’re sort of I guess the two, as I ask you about is, number one, how much is it going to cost? And number two, how long is it going to last? And the thing with the customer is, obviously we want to work within your budget; not everybody is looking to buy a high-end performance set of tyres. Most people are just looking to get to work and back every day and that’s all they need their car to do. You’re going to have plenty of budget options that are going to more than do that job.

They’re still going to get the car from A to B, they’re going to be handling and gripping and performance and that sort of stuff for your everyday driving. Whereas, as I said, the differences is, if you can afford it, or if you are happy to put in that little bit extra, you’re going to get a significant increase. And so, there are a lot of different things you can compare it to. You know, you mentioned about, like you go and buy a pair of shoes, there’s a big difference between a $20 pair of Velcro runners at K Mart, as opposed to buying a pair of $250 Reebok sport. And when you go out running on the track, you’re going to notice that difference.

Niko: Yeah, definitely. Just another thing; I mean, like say someone comes in and says, “Look, I want the safest tyre there.” Does that mean you’re going to get him the most expensive? Or does it mean you’re going to look at his car and say, “Look, these are the recommended tyres and that’s [unclear08:38] is for.” Or you say, “Look, if you do want to spend a bit more, these are going to be a little bit safer, but you’re not going to get the same wear and tear.” What is say? Because I mean, for me personally, because I got kids driving it all the time, I would say, “Lee, I want the safest tyres available. If it costs me a little bit more I don’t mind, but as long as they’re going to be safe.”

Lee: Yeah, absolutely. And so, this is where we go back to that good, better, best thinking. So, our discussion with the customer is along the lines of, “Okay, well, what is it that you’re looking to get out of your tyres? You’re looking for safety, you’re looking for fuel efficiency, you’re looking for longevity, or are you just working on a budget? What’s sort of the most important thing for you in terms of how we can help?”

So, you’re looking for the safest tyre on the market; depending on the size of the tyre and the car that you’re driving on that, I’d also then say, “Look, if that is something that’s outside of your budget we can then look at the next level down.” And so, generally speaking again, without going into specifics on brand, you know, sport tyre. Again, because you’re just going to get the grip, you’re going to get that performance out of it. And then, there’d be one or two budget brands that we might have available that do a sports option as well that we could look out for you. But, that’s where we from our point of view, there isn’t any one single tyre solution for any one customer.